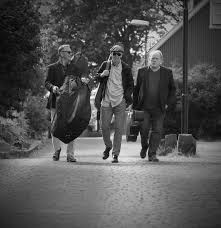 Guitar Islancio was formed in 1998 by Björn Thoroddsen and Gunnar Thordarson and has since then performed across the globe, headlining concerts both in Iceland as well as in Scandinavia, mainland Europe, North-America and Asia.

The trio has released five albums, four of which contain jazzed-up versions of Icelandic folk songs. The album “Scandinavian Songs” also includes music from all the Nordic countries, The Faroe Islands and Greenland. All five albums have been critically acclaimed and have received bestseller status in Iceland.

In both 2000 and 2001, the city of Reykjavík awarded Guitar Islancio with the title of “Official Musical Group of the City”.

At concerts, the trio’s program is an entertaining mix of original material, Icelandic folk songs and jazz standards. The trio is famous for its powerful and lively performances and as such, it truly lives up to its name: the word Islancio is an Italian musical term and means with dash or with impetuousness. So playing “con islancio” means playing impetuiously. The sound of the word is also undeniably reminiscent of Iceland, and so the name is both musical and “Icelandic”.